Distinguished in the art of acting, Cicely Tyson was and always will be an icon, a symbol of hope for not only her own community but for all who strive for excellence. The Emmy-and-Tony-winning actress had a 40-year long career in film, theater, and television. Most widely known for her roles that uplifted and shed light on the history and culture of Black Americans; “Miss Jane Pittman, “ “Roots,” “The Wilma Rudolph Story, “ and “King: The Martin Luther King Story” just to name a few.

Behind every great woman, there is an even greater love for stylish eyewear. Cicely’s choice of eyewear has changed throughout the years. Traipsing from a classic 1940’s cat-eye to a 1960’s oversized round lens frames. Most often the glamorous Cicely was caught in tortoise-colored frames, which as history tells us has and always will be a sign of luxury, status, and elegance.

One thing has remained the same year after year and that is her undying love and dedication to her craft, her people, and her legacy. At 96 Cicely said her final goodbyes to the world and much like that Tortoiseshell shade of glasses, she will never be forgotten.

Van Jones, a man of many trades. A New York Times best-selling author, TV show host, and as most would call it a Change Maker. A changemaker is best described as an individual who is taking creative action to solve a social problem. Van has made it his life’s goal to completely alter the criminal justice system. Known for being the face and co-founder of ColorofChange.org and currently the CEO of the Reform Alliance, an organization dedicated to the freedom of those wrongfully oppressed by the criminal system.

Van has spent the last 25  years of his life fighting for others, changing the hearts and minds of those within his reach and beyond that. A difficult task he has done while maintaining his cool, calm, yet serious and powerful appearance. Some say it’s the suit jacket, others say it’s his iconic purple tie, we say it’s his round-shaped rimless glasses. According to a tweet from Van in 2019, the only place he gets his glasses made at Precision Vision In Berkeley, CA, calling Allen from Precision the best in the world. What can we say great things come out of the Bay Area of Northern Ca. Much like your glasses Van you are a constant reminder of what greatness looks like.

One word comes to mind when Michelle Obama’s name is said, Phenomenal. Most of the world knows her as the nation’s First Lady from 2009 until 2017. During this time she became an advocate for social issues such as poverty, education, and healthy living. Alongside her husband Barack Obama, the two were the first black family to inhabit the halls of the White House. This phenomenal woman long before she was the First Lady achieved beyond the masses. Attending Princeton University and shortly after graduating cum laude, studied Law at Harvard Law School.  Michelle then began her career as a lawyer, city administrator, and community outreach worker.

Along with her hard work as an advocate, we can most certainly add her regal style to her list of accomplishments. Michelle’s outfits were nothing short of striking, but her exquisite taste in shades truly set the tone. Following the lead of the great Jackie Kennedy, Michelle’s go-to pair of shades is the RB4101 Jackie OHH by Ray-Ban, exhibiting nothing but glamour beauty, and class. Dating back to World War ||, the aviator frame has always been classified as elite and iconic. So it only makes sense that Michelle is drawn to such a frame that basically screams “Wear me, First Lady, Wear me”. Adored by many for all of her courageous efforts to make this country a better place, we give thanks to you Michelle, and ask that you continue to show us what style beauty and grace really look like.

“As an American actor, a lot of our stories have not been told” -Chadwick Boseman.

True as can be this statement by Chadwick is what fueled his passion and propelled his career. The recently deceased playwright and actor was a life taken too soon, his journey of telling untold stories had only just begun. Films like 42, Get on Up and Marshall shed light on iconic heroes in the African American community. But it was not until 2018 that he himself became an iconic figure, in the Academy award-winning movie Black Panther.

Chadwick was many things; humble, talented and of course iconic. In 2019 while at the NAACP Image Awards Chadwick graced the red carpet with a dapper presence. And resting every so perfectly on his face was a pair of acetate full-rim glasses. What was typically an uphill battle for most glasses wearers came so easy to Chadwick, finding that perfect pair of glasses that allowed you to take clear up your once blurry vision and helped you make a fashion statement while doing it.

Oprah Winfrey The Queen of all Media has held reign over her kingdom since the ’80s. Her career began with radio and television broadcasting, shortly after she found her calling in talk show hosting. From 1968 to 2011 she hosted The Oprah Winfrey Show, a nationally syndicated program that aired for 25 straight seasons. OWN (Oprah Winfrey Network), the name of the media mogul’s own network,  was very much a passion project that had a rocky start. Oprah got her big break during an interview with Lance Armstrong, the interview swept the nation and made OWN bigger than life.

The Queen certainly had her own way of doing things;  building empires, inspiring the masses. Her eyeglass choice was no different, it’s what she is praised for year after year, event after event. Casual cat-eye, professional cat-eye, clear round glasses, retro circular tortoise just to name a few. Most recently Oprah has taken an interest in an oversized ritzy thick-rimmed frame. Adding a little modern edge to a timeless classic was her specialty both on and off the air.

Pop Culture icon Samuel L. Jackson has made his career in filmmaking and acting. Inspired by films that displayed messages of black culture and history Samuel after graduating from Morehouse, a historically black college, joined the Black Image Theater Company. Submerging himself in his newfound love he was able to learn from greats before him, like Richard Pryor and James Earl Jones. Acting in over 120 films Samuel is widely known for award-winning films like Jungle Fever, Pulp Fiction, Coach Carter, and Shaft.

Developing a very distinct image from the jump of his career, Samuel was a suave, powerful, and bold creative. His style was unmatched and so was his choice in glasses. This eyewear icon today is most often seen in round full rimmed glasses, that make even a plain jogging suit look chic. Some of the earliest engravings of eyeglasses dating all the way back to the 13th-century showcase round as the go-to shape. And within recent years they have made a thrilling comeback. Samuel being the overachiever that he is surely has something to do with this comeback.

No other name comes to mind when it comes to fighting injustice and empowering the African American community. Whoopi Goldberg is constantly fighting to remind all African Americans to own and understand their identities and the evolution of them. To be who they are unapologetically and always grow from within, words she herself lives by. Whoopi’s career has ranged from playing complex characters by day and making people cry from laughter at night.  Her big break came in 1985 when she took on the dynamic character of Celie Johnson in The Color Purple. Telling a story of struggle, love, and race this Pulitzer prize-winning film is now a staple in the homes of millions.

In recent years our Grammy award winner has found her home on The View. Co-hosting an Emmy-winning daytime television show that touches on current hot topics of pop culture, race, beauty, relationships, and the list goes on. On a recent taping, Whoopi opened up about her journey with glasses and disclosed to viewers that at 63 years old she is no longer allowed to drive because of her terrible eyesight. Her sight has always been something she’s struggled with, making it imperative that she not only has the right frame but the right prescription and lens. Whoopi is one of the millions of American adults that have bad eyesight. She is neither ashamed of it nor hindered by it, she just continues to be her best self day by day. And that’s all anyone can ask for.

From Cicely Tyson to Whoopi Goldberg, these Black leaders and celebrities are strong proof that eyewear can be iconic and a staple of a signature style. 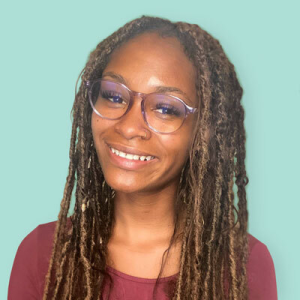 Being the first point of contact for many of our clients and prospective clients I have made it my mission to fully understand the needs and desires of our audience. I have had the opportunity to handoff SMB and MidMarket level contacts to my account executives. We strive to work together to ensure that we provide the best virtual try-on experience we can offer. Lately, my process has come full circle and I am becoming more and more involved with the marketing side of Ditto.
Share on linkedin
Share
Share on twitter
Tweet
Share on facebook
Share
Share on email
Send

How Eyewear Brands Can Elevate their B2B Portals

4 influential female leaders making their mark on the eyewear industry

Try the Demo
Get in Touch

Latest in the Ditto Blog

Learning from Virtual Try-On Beyond Eyewear

How Eyewear Brands Can Elevate their B2B Portals

Ditto is the leader in virtual try-on and frame recommendation technologies for eyewear brands and retailers.